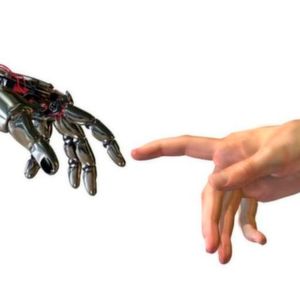 Innovation in technology is something that we all use and look forward to using. We want to see the new things come along and make our lives better, of course. AI in manufacturing is one such innovation that we are looking forward to seeing and want to use to our advantage, but it is also an innovation about which we have grave concerns.
Nearly every type of innovative change may be a double-edged sword.
Inventions come along every day that change the way that we do business and the way that we manufacture. Innovations give us the means to perform tasks faster, better, more cheaply. This is known as displacement or the displacement effect.
In China this kind of innovation has been a part of the changing landscape for more than half a century.

New technology and innovation freed them up for manufacturing and many other, safer pursuits. New methods can take away jobs, but conversely they can also create jobs for everyone. The jobs that they can create may be higher paying and safer jobs.

From job security to national security, it’s no secret that one such innovation–AI or artificial intelligence –has caused some grave concerns in both industry and individual sectors, but it has also given new hope and new life to many job sectors.

AI and the technologies that it engenders such as robotics, autonomous vehicles and drones have the power to boost our economy and to boost our business growth. They will add billions of dollars to our economy this year alone.

Unfortunately,AI also has the power to negatively impact jobs. In July of 2018, PwC’s UK Economic Outlook confirmed that AI could and likely would displace jobs that are being done by humans—even over the course of the next five years.

While AI has the power to replace humans, it will also create new jobs and bring better and more innovative products to the marketplace. The impact on the UK and the US will stay at about 20 percent and is projected to remain largely neutral .

This means that there will be approximately as many jobs created as there are jobs lost. That holds true in the UK and probably the United States but the same is not true everywhere. Around the world, where many low skilled jobs and manual jobs are being done, these lower paying jobs may be undertaken by machines using AI.

One example of this is China and it is not surprising that people are resistant to the use of AI when they are not well trained and will not –in their opinion—be able to find another job to support their families.
The technologies associated with AI may well displace more than a quarter of all jobs that are currently being done in China. Between 26 and 27 percent of current jobs may be lost.

Fortunately there is one more difference. AI will also create more jobs in China than it will in the rest of the world. In China, particularly in the service sector, the net job increase is expected to be around 29-31 percent. That amounts to about 97 million jobs being created by the advent of new AI technology.
Whether or not the current labor force is able to be retrained to do these jobs remains to be seen, but there will be myriad new positions being created by the advent of AI technology and these will be higher paying and infinitely safer for the average worker.

What’s your take? Can lower skilled workers without a lot of tech savvy be retrained to allow them to keep their jobs?